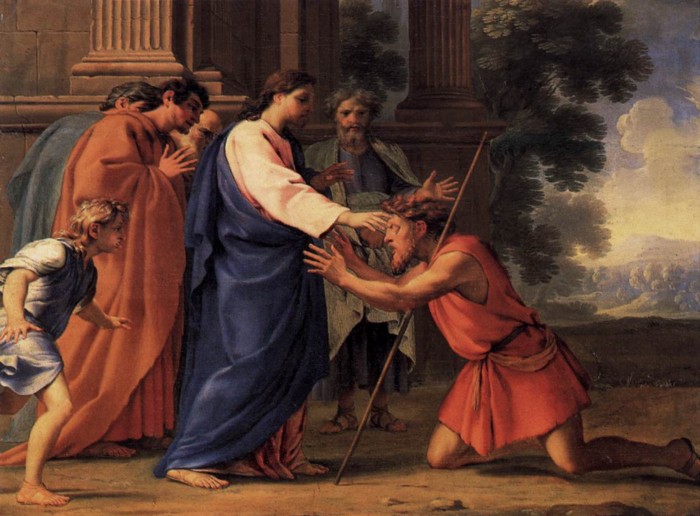 What is money, really?

One of my favorite stories in the Bible is in Acts 1. Jesus has been with the apostles for over 3 years. He’s also spent about 40 days with them after rising from the dead. He’s about to go up to heaven and leave them. They have one question they ask and the question is:

So when they had come together, they asked him, “Lord, will you at this time restore the kingdom to Israel?” — Acts 1:6

After three years of miracles, direct teaching and witnessing Jesus rise from the dead, they still didn’t quite get what the kingdom of God was all about. For them, establishment of Israel was the Old Testament prophesy that He had not yet fulfilled. The Messiah was supposed to restore Israel and while they’d all seen the miracles, they hadn’t gotten the message that Jesus fulfilled that prophesy in a way that they didn’t expect. The kingdom He restored was one that was much broader than a political kingdom. His kingdom would be a restoration of humanity as a whole.

Blind Spots in our Education

You can forgive them for their ignorance in this matter. Jewish teaching at the time, and to some degree today, believed that a Messiah would restore the nation of Israel and that’s what these Jewish followers of Jesus grew up learning. They didn’t have the benefit of the perspective we have today of seeing Christ change civilization forever.

I bring this story up not to make fun of the apostles, but as a reminder that everyone has blind spots. Like those apostles, there are certain ways of thinking about things that are entrenched in us. Some of those perspectives are just wrong, and to correct them is often a Herculean effort.

One of those things is money and the economy. Our tendency is to think that we understand them based on what we’ve been told. Money is what the government decides. The economy must be managed centrally. The people in charge know what’s likely to happen and we must do what they say to avoid disaster.

We think we understand because we work with money all the time. We use it to buy stuff, we earn it by working, we invest it and have lots of interactions with money, which makes us think that we understand it. Much like the apostles and Jesus, we’ve spent a lot of time with money, but that does not necessarily mean we really understand it.

What’s particularly dangerous is that many assumptions about money and economics sneak into our worldview and get conflated with our Christian convictions. We think that our convictions on how the economy works has the same moral force as the law written on our hearts or the convictions we have as Christians.

This is particularly dangerous with money because money is where the rubber meets the road as far as actual expression of Christian convictions is concerned. We don’t just love others. Loving others often requires sacrifice, or allocation of resources we are put in charge of.

How we view money has infected how we look at the gospel.

Worse, many people use the gospel as a way to convince others of non-gospel convictions. Just about everything has used Christianity as a justification for behavior or beliefs that simply aren’t the gospel. Chattel slavery, socialism and wars of conquest were all argued as Christian when they clearly were not.

That’s unfortunately the position we’re finding ourselves in the money and economics realm. There are those that tell us what Christians should believe, not from critical examination of the Bible, but from convictions from an ideology outside the gospel.

This is false teaching and we must be very careful about such claims.

In particular, there’s a tendency to view current norms as somehow right or correct. There have been many norms throughout history that we would find horrifying today and vice versa. One of those things is our current monetary system.

Our church forefathers would be horrified by the current system and their analysis morally of monetary systems, particularly ones controlled by a central authority, is well documented.

The current monetary system is a cesspool of theft, corruption and cronyism. I’m not exaggerating. I’ve made the argument in my book about how the system of central bank backed fiat money is theft at its core. The ability of Central Banks, and really all the member banks of a central bank to issue credit without anything backing it, is ultimately theft from all other holders of the currency.

But if you doubt me, start with this. What is money supposed to be? What is it supposed to represent? What is inflation? Exploring any of these topics in depth will naturally lead to questioning the morality of the current system. Much of the wealth of the United States, for example, is based on a dollar dominance that’s neither earned nor fair.

Getting Out of the Cesspool

So what are Christians to do? How should we think about not just the money, but the very monetary system that we were born into?

If the current system is morally wrong, it is our moral duty to work to change it. William Wilberforce did this with chattel slavery by fighting against it until England abolished slavery. Perhaps we’re not quite ready to go on a moral crusade just yet, but there is a way to start exploring alternatives.

Much like the apostles who thought the Messiah would politically restore Israel, we find ourselves in the position of finding that our money isn’t anything like what we thought it was. Our assumptions around the current monetary system are being proven wrong, so we should be looking at alternate explanations. There’s a digital alternative in Bitcoin. As Christians and as investors, exploring this alternative is a good thing.